Watch the muzzle flip and how his wrist moves as he shoots a Glock 18c in full auto.

Same gun, but see how the muzzle flip is minimal. Doesn't everyone want to manage recoil like Mike Seeklander?

Achieving this level of proficiency in managing recoil requires strength in the forearms and the wrists. Of course there are ways to mitigate muzzle flip such as a heavier all metal gun, addition of a frame weight, and handloaded ammunition that just barely makes power factor. But ideally, one should be able to control the recoil for the majority of pistols based on strength and technique.

Detailed instructions for making and using a wrist roller specifically for shooting sports are [available online](http://pistol.mit.edu/wp-content/uploads/2014/10/Wrist-Roller-Instructions.pdf). 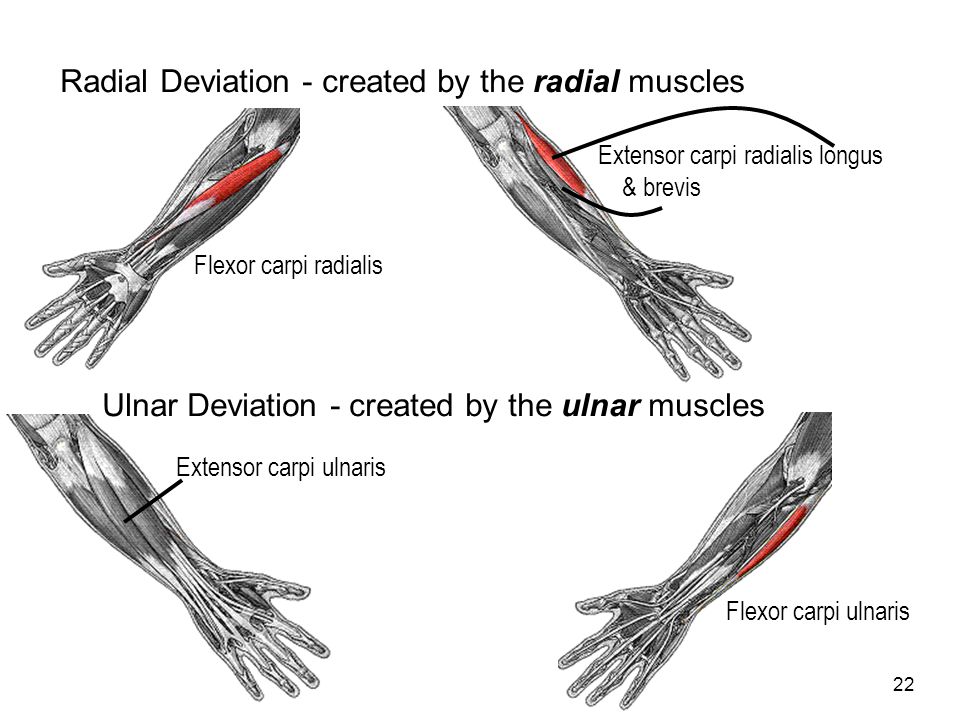 In the image, the extensor carpi radialis is connected to tendons in the elbow. Repetitive motions, such as bringing the pistol down from recoil to regain the sight picture quickly can cause tears in the tendons, otherwise known as tennis elbow.

Exercising the ulnar and radial deviations can strengthen the flexors and extensors and minimize muzzle flip during recoil.

As with wrist curls, you should be able to do a set of 10 repetitions comfortably at the beginning. A long handled sledge hammer can be used instead of a barbell with a weight, with the advantage of increasing the difficulty by holding it further away from the hammer end.

So why so much interest in wrists and forearms? This (infamous) clip of a woman shooting a Desert Eagle demonstrates the direction of travel during recoil, which is vertical. Kudos to her for trigger finger discipline.

New shooters are often told to grip the gun high, bringing the web of the hand as close as possible to the slide. The explanation for this is that the more your hands cover the gun, the increased surface area will help with recoil management. However, if we look at the physics of recoil, we know that the pistol travels vertically and that muscles in the wrists and forearms are what stops or slows down the rate of travel. Gripping a pistol tightly engages the forearm muscles, which decreases muzzle flip and promotes faster recovery for follow on shots.

During the 2015 shooting season, I experienced tennis elbow and had to take several weeks off from practice to heal to the point where the pain was tolerable. I found these exercises helpful for alleviating the pain. I often do some them while driving to the range as a warm up.

3 Gun Mods I've made the following modifications on the Stoeger M3000: opening the loading port replacing the safety…

More on using Captains of Crush grippers for strength training. The key take away is being able to move…